On November 17th, 2020, the National Decree regarding the introduction of Book 2 Civil Code of Aruba (in Dutch: “Boek 2 Burgerlijk Wetboek van Aruba”, hereafter “Book 2”) was published in the National Gazette 2020 no. 172. Book 2 came into effect on January 1st, 2021 through this National Decree.

In this newsletter, we will provide a brief summary of the contents of Book 2. In the upcoming weeks we will inform you more in depth about some specific aspects of Book 2.

On June 13th, 2019, the State Ordinance regarding Book 2 was published in the National Gazette 2019 no. 38. Book 2 contains all the laws pertaining to various forms of legal entities in Aruba.

There are multiple notable aspects and changes to legal entities which will be elaborated on more in depth in upcoming newsletters. Below is a summary of these notable changes.

As of January 1st, 2021, the incorporation of AVV’s or the conversion into an AVV is no longer possible. An AVV must be converted into a limited liability company (“VBA”) or another legal form within three years after Book 2 came into effect (ultimately January 1st, 2024). Existing AVV’s must bring their articles of incorporation into conformity with the law if the articles of incorporation are amended for another purpose, for example a statutory change of the name of the entity. Meaning the AVV will have to be converted into a VBA or other permitted legal form.

Changes to the NV & VBA

New authority of the Chamber of Commerce

The Chamber of Commerce has also received the authority to dissolve inactive legal entities when certain conditions are met.

Possibility of a Turbo Liquidation

“Turbo liquidation” (a simplified and expedited liquidation) is possible for legal entities if the liquidator determines that there are no assets or sources of income in that legal entity. The legal entity will cease to exist as of the moment when the abovementioned, stipulated in a statement, is filed by the liquidator with the trade register and has been published in the Official Gazette of Aruba. We will elaborate more in depth on the possibility of a turbo liquidation in a subsequent newsletter.

The regulations with respect to the compilation of financial statements will be modernized and brought in line with international standards.

Contrary to earlier drafts of the legislation of Book 2, an audit of the financial statements will not become mandatory by law through the enactment of Book 2 but instead will remain optional. The shareholders can decide to mandate an audit through the bylaws of the company.

Directors and supervisory directors may become liable towards third parties for damages suffered as a consequence of misleading information in the financial statements.

We will elaborate more in depth on this topic in a subsequent newsletter. 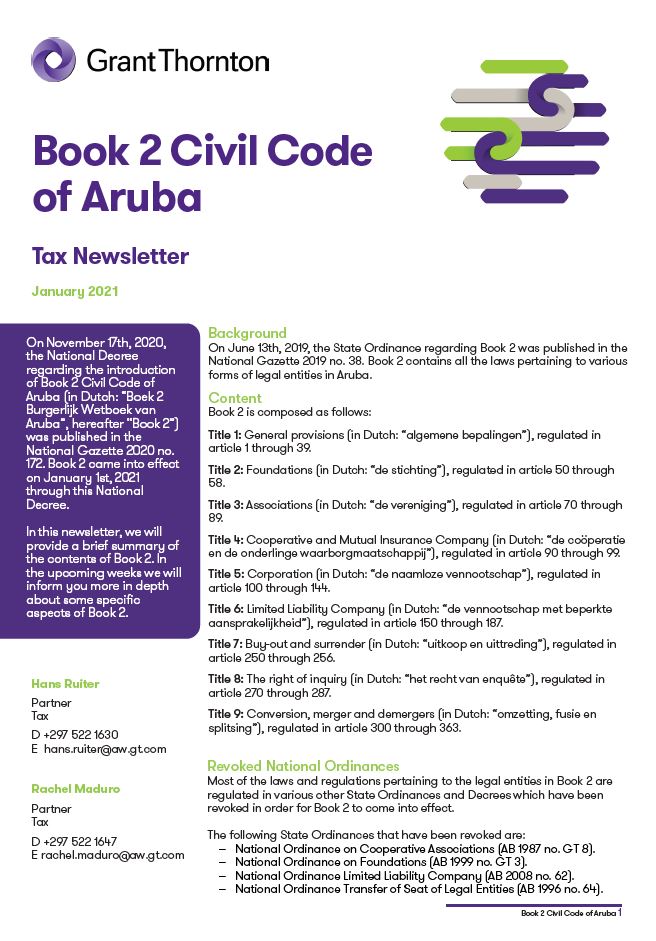