Doing business in The Netherlands

The Netherlands is the sixth largest economy in the European Union. It has one of the largest recipients of foreign direct investment (FDI) in the world due to its status as an attractive investment location and rich history. The Netherlands is a founding member of the EU, Eurozone, G-10, NATO, OECD and WTO, and a part of the trilateral Benelux Union. The country has a market-based mixed economy which has played a key role in the European economy for many centuries. Its leading sectors include: shipping, fishing, agriculture, trade and banking.

Economics growth strengthened for the Netherlands over 2015 with a full year GDP growth rate of two per cent. This growth has primarily been driven by strong exports and rising private consumption and investment. The Netherlands plays a strong role as a European transportation hub and its strong agricultural sector which, despite employing only two per cent of the labour force, reinforces its status as the world’s second largest agricultural exporter. As all sectors benefit from growing demand in the coming years, the growth rate is expected to increase to 2.1 per cent and 2.3 per cent for 2016 and 2017, respectively. 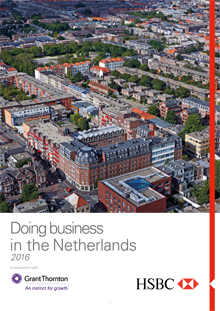